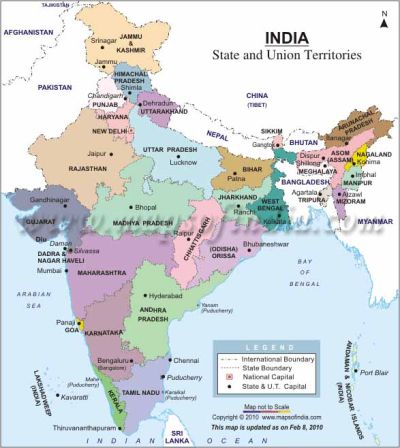 Known for its cultural heritage and warm and friendly people, India is one the oldest civilizations on earth. In Hindi India is known as Bharat of Hindustan. Officially known as the "Republic of India" it is the largest liberal democracy of the world. India is divided into 28 states and 6 union territories. The language, geography and climatic conditions and huge natural resources are hardly comparable with any other country.

India is strategically located in southern Asia, bordering Pakistan China, Nepal, and Bhutan on the north; Bangladesh, Myanmar (formerly known as Burma), and the Bay of Bengal on the east; the Palk Strait and the Gulf of Mannar and the Indian Ocean on the south; and the Arabian Sea and Pakistan on the west.

is the capital of  and is one of the largest cities.

believes in “spiritual integrity” and “unity in diversity”. The secular nature of  has attracted philosophers and researchers from across the globe to explore . Peace, prosperity and religious tolerance are other integral parts of ’s composite culture.

is also the land of the Vedas - the oldest scriptures in the world. It is divided in four-volumes and is regarded as the storehouse of national thoughts. ’s love for complex art forms is evident in the various religious and mythological references.

Today,  is the world’s seventh largest country in terms of area and second in terms of population. The sights, sounds, the ancient temples and the lush paddy fields make the country unique and amazing. It has 22 major languages with 844 dialects, making this country and its people culturally diverse.

Here, Each state is provided with link on the map given below; click on the respective State, UT or City to have vast information on certain specific topics of your choice viz. Facts & Figures, History, Geography, Flora & Fauna, Government, Economy, Education, Culture, Tourism, Health, Sports,…and many more…Click Here 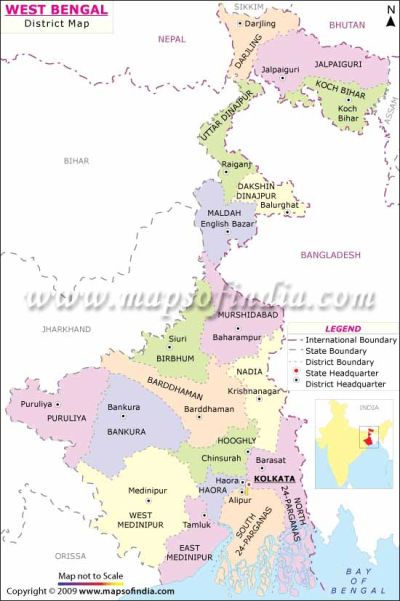 , a state in eastern , stretches from the  in the north to the  in the south. It was on  when  was given the status of a separate state in the Indian union, purely on linguistic basis.

The state has been subjected to a variety of influences from diverse cultures. Since time immemorial, the culmination of these varied cultures along with 's very own ever-growing richness has given birth to a unique Bengali culture.

It is a land of varied charms. Right from the mighty  in the north to the sea-caressed beaches in the south, it is a wonderful journey over the verdant plains, hilly terrains, forests and the wonderful mangrove forests like the Sunderbans.

is a prosperous state with more than two third of the population depending on agriculture. The people believe in “simple living and high thinking” policy. The state has been ruled by the left Front for the past 30 years making it a democratically elected communist government. In the more recent time, there is tremendous reformation going on at various sectors viz. economy, education, transport and tourism etc.